What is the nutritional value of squid? 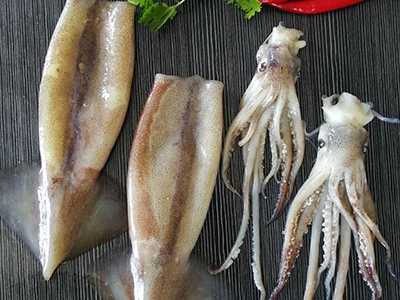 Squid can be said to be a relatively common aquatic product. It has rich nutritional value and unique dry mouth. But for many people, it is a headache to make squid. Today we will talk about the benefits and common practices of squid.Nutritional value of squidModern medicine has found that squid has the advantages of high protein, low fat and low calorie, and its nutritional value is not inferior to beef and tuna.Each hundred grams of dried squid contains 66.7 grams of protein and 7.4 grams of fat, and contains a large amount of carbohydrates and inorganic salts such as calcium, phosphorus and sulphur. The protein content of fresh squid is also as high as 16% to 20%, and the fat content is extremely low, only about 4% of the average meat, so the calories are far lower than meat.The squid is rich in protein, calcium, phosphorus, iron, and trace elements such as calcium, selenium, iodine and manganese. It is also rich in DHA (commonly known as brain gold), highly unsaturated fatty acids such as EPA, and high content of taurine. .Eating squid can effectively reduce the accumulation of cholesterol in the blood vessel wall, and is effective in preventing the formation of hardening of the blood vessels and gallstones. At the same time, it can supplement brain power and prevent Alzheimer's disease. Therefore, for middle-aged and elderly people who are prone to cardiovascular diseases, salmon is a healthy food.Squid's edible tabooSquid must be cooked and then eaten. Because fresh squid has a peptide component, if it is not cooked, it will cause intestinal dysfunction.Arteriosclerosis, hyperlipidemia. Qi deficiency constitution, qi stagnation, damp heat constitution, yang deficiency constitution, yin deficiency constitution and other unsuitable squid.The aquatic products such as squid are cold and cold, and those with spleen and stomach deficiency should eat less. Patients with diseases such as spleen and stomach deficiency, hyperlipemia, hypercholesterolemia, arteriosclerosis and other diseases such as liver disease and liver disease do not eat. Squid is a haircut, and people with diseases such as eczema and urticaria do not eat.Common method of eating squid1, flowerTilt the blade at 45 degrees and gently cut out the wide strips of the squid. Don't cut it, 1/2 deep can be;Then turn in the direction and cut it 90 degrees perpendicular to the first cut, do not cut it; be sure to cut on the side without the skin, otherwise there will be no squid roll.Cut the squid with a knife into a triangle.2, go to the smellCarp contains a large amount of nutrients such as protein, amino acid and lecithin. Due to the action of the environment and its own bacteria, it produces a variety of astringent substances. These deodorant substances are alkaline compounds, so they are moderately added with vinegar during cooking. It can greatly reduce the odor of the cockroach. In addition, ketchup and tomato contain organic acids such as citric acid and malic acid, which also play a role in neutralizing and removing mites.3. Recommended practices(1) Scallion squidPractice: squid to its internal organs, washed and dried, onion and parsley stalk cut into sections; take the squid body, go to the surface of a film; squid body is divided into two, with a flower knife; hot pot cold oil, oil warmth Into the ginger, garlic, red pepper section, cumin granules, stir-fry the scent.Under the squid, stir-fry the fire; cook the cooking wine and soy sauce; stir fry until the squid rolls, into the onion and parsley; add salt and MSG, stir fry a few times, you can cook.(2) Sauerkraut squidPractice: 1 squid, half of sauerkraut, 2 peppers, 2 celery, 1/2 teaspoon of salt, 1 small piece of ginger, 10 cloves of garlic, 1/2 tbsp of cooking wine, 1 tbsp of soy sauce, 1/2 tbsp of rice vinegar 3 kinds of pickled peppers, 1 teaspoon of sugar, 2 tablespoons of vegetable oil.The squid peeled off the outer membrane, washed and divided into large pieces; chamfered flower knives, and then changed into small pieces; soak the sauerkraut for 2 hours in advance, remove some salt, wash and cut small granules, stir fry the water vapor; Cut a small section, ginger garlic mince, green pepper and celery cut into sections. Stir-fried sauerkraut is ready for use.Another pot, cold water into the pot to cook until the squid has just started to roll, the water in the pot will not be quickly opened in the future; from the oil pan, stir fry ginger and minced garlic, add sauerkraut and pickled pepper to stir the scent, add green pepper and Celery, add a little salt and stir until the green pepper is slightly soft. Add the squid that has been simmered in water, cook a little cooking wine, add the soy sauce and stir well, and cook a little rice vinegar along the pot.